Six people burn beyond recognition in collision on Otjiwarongo-Kalkfeld road

Six people burn beyond recognition in collision on Otjiwarongo-Kalkfeld road 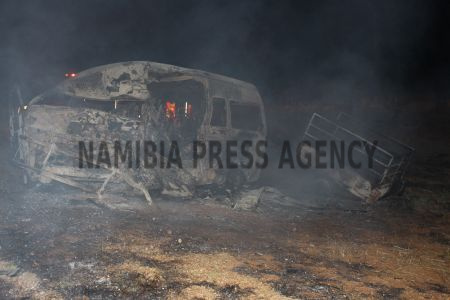 OTJIWARONGO, 28 NOV (NAMPA)  Six people burned beyond recognition on Friday night after a Quantum mini-bus they were travelling in collided with a GWM double cab on the Otjiwarongo-Kalkfeld road in the Otjozondjupa Region.
Namibian Police Force (NamPol) crime investigations coordinator in the region, Deputy Commissioner Naukalemo Andreas in an interview with Nampa at the accident scene said a total of 19 occupants were in the 16-seater Quantum, including its driver.
She said the accident occurred at about ...